When Kathy Cohen and her husband, Tom Sgroi, first moved to the North Arlington neighborhood of Madison Manor, they figured they would leave their small starter home on North 11th Road within a few years.

That was 13 years and two children ago. Now, Cohen said, their ties to the close-knit neighborhood have become stronger than any desire for room to grow.

“The biggest disadvantage of living here–the small size of the homes and their close proximity to each other–is also the defining characteristic of the neighborhood,” said Cohen, formerly an interior designer. “This is an old-fashioned neighborhood with a very tight community and an active civic association that sponsors fun events.” 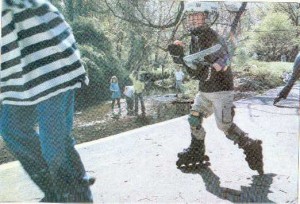 Sam Sgroi skates on a bike path, enjoying the outdoors with other Madison Manor children at the neighborhood park, the heart of the community.

It’s not surprising that Cohen is a neighborhood booster–her husband heads the Madison Manor Citizens Association, which backs events such as a Halloween bonfire and an Easter bonnet parade.

Karen Bate, who lives a few blocks away on Powhatan Street, also is a Madison Manor fan. “It is rare nowadays to find such a self-contained neighborhood,” she said. “There is such a community feeling here. We were lucky to find this little pocket, this 1950s-style neighborhood, only 10 minutes from D.C.”

Bate, a grant writer for Arlington Housing Corp., and her husband, Frank “Pancho” Bate, who owns an Arlington coffee and ice cream shop as well as the District’s Front Page and Tequila Grill restaurants, have lived in Madison Manor for nine years.

The neighborhood’s winding streets are lined primarily with modestly sized brick houses reflecting the major architectural styles of post-World War II suburbia: Cape Cods on one street, colonials on another, ramblers and split-levels in between. Most yards are small but well-tended. And everywhere there are signs of additions past and present, from simple closed-in porches to second-story pop-ups.

“Talking about planned renovations has become a neighborhood pastime,” Cohen said, laughing. “We have similar houses and are always curious about what types of additions our neighbors have put on.”

A few years ago some residents became tired of wondering and put together an “addition tour” of neighborhood homes. Cohen, who sees a renovation in her future, said about 40 people toured their neighbors’ renovated homes.

The heart of the neighborhood is Madison Manor Park, which abuts Interstate 66 and the Washington & Old Dominion (W&OD) and Four Mile Run bike paths. “The neighborhood is brought together by having a central park as a place to meet,” Cohen said.

The park has ball fields, courts for tennis and basketball, and a picnic pavilion. Beth Hudgins, a mother of two who lives a block from the park, also cited the fenced tot playground and public restrooms as major draws.

“The park is very important to the neighborhood,” she said. “The kids basically grow up there. As toddlers they meet most of the children they’ll end up with when they start school.”

Hudgins, editor of the civic association’s quarterly newsletter, is in charge of the community bulletin board at the park, where many civic association activities are held. It’s where neighbors gather for Popsicles and a three-legged race after the annual Bike and Trike Memorial Day parade, or for hot apple cider and cookies after the holiday caroling and house decorating contest.

Jonathan Harmon, who moved to his Quintana Street home as a boy in 1954, cited the civic association as a catalyst for bringing together neighbors. Harmon, now director of the Arlington Planetarium, said that in the early 1990s he and others decided to “rejuvenate a sense of cohesiveness in the neighborhood” by jump-starting the then-waning association.

BOUNDARIES:
McKinley Road on the east, North Roosevelt Street on the west, I-66 on the north and Wilson Boulevard on the south.

Sometimes, Harmon noted, neighborhoods come together with “negative glue” when people unite to fight an issue. The new civic association officers, though, sought to build community through the “positive glue” of shared social experiences.

Karen Bate organized the neighborhood’s annual stream cleanup in late March and was pleased with the turnout of nearly 30 people. Civic association member Marianne Mooney, president of the Potowmack Chapter of the Virginia Native Plant Society, recently helped arrange for Arlington County to plant 10 native flowering trees in the park. And association members are drafting a plan, to be submitted to the county’s Neighborhood Conservation Committee, seeking such improvements as new park signs and measures to ease traffic.

Negative glue, however, has become a factor with a proposal by Gov. James S. Gilmore III (R) to widen I-66 inside the Capital Beltway. Harmon, whose home is near I-66, said he may reevaluate whether to stay in the neighborhood if the widening occurs. Mooney worries that the plan could damage the park and Four Mile Run. Cohen, Sgroi and other neighborhood residents protested the plan at a news conference Gilmore held last fall. The civic association has appointed a representative to the Arlington Coalition for Sensible Transportation, a citizens’ group who stated purpose is “to ensure that no changes are made to I-66 unless such changes are part of a comprehensive regional transportation plan and are made with community consensus.”

Harmon noted that Madison Manor has changed in many ways over the decades. He remembers when the W&OD Railroad still ran along the area where the bike paths are now, and when another stream cut through the center of Madison Manor Park. “When I was a kid, I’d lay in bed with the window open and I could hear the mockingbirds from a neighborhood away,” he said. Now he hears the hum of I-66, “a constant intrusion into what was like a wilderness here.”

Yet, he said, “the neighborhood still carries many of the pleasures” it did when he was young. Wildlife remains–two Southern flying squirrels nest in one of his birdhouses–and there are wooded areas around the park. Although there are fewer children than there were when he was young, there are still plenty and the area remains relatively safe.

In those important ways, Harmon said, “the neighborhood has remained pretty much the same. I like that. I look at it as an island of timelessness inside an area that has had a lot of change.”